Save the black mountain hill walk and camp out 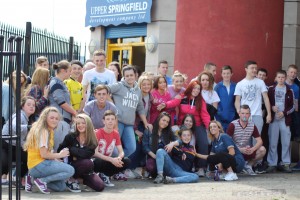 Earlier today we caught up with BJ McKevitt from the Terry Enright Foundation and our very own Michael McAllister, who were kitted out with tents, sleeping bags and walking boots, ready to venture up the Belfast Hills with a group of 100 young people. With the sun shining at last over Belfast it was obvious that the pair were raring to go on what would be the partnership’s third annual camp out. “This is to give the young people who live in the shadows of the hills the chance to appreciate environment around them,” explained Mr McKevitt. “It educates them about the hills and this in turns helps to crack down on problems with wildfires in the area.” In recent years, the number of wildfires has dropped dramatically, which the pair claimed were a consequence of schemes such as this one; schemes that allow young people to learn about the local environment.

“We are reducing negative usage of the hills and building on positive usage” emphasised Mr McKevitt.

The cross-community event set off from the Upper Springfield road at 2pm to meet another group which were arriving from the Shankill rd. Not only has the camp-out has received a lot of support from the National Trust,  but the Fire Service and Mountain Rescue will be making an appearance this evening to give a talk and presentation about the importance of health and safety.

Michael explained to us that although the walk is generally for young people aged 13+, it is really an all ages event, with families choosing to join for the night time activities. “Aside from the educational talks we have a BBQ and a Midnight Walk, where the young people have the chance to see over the whole of Belfast.”

The event, which has a large number of partners including the Terry Enright Foundation, The USDT Youth Team, The Black Mountain Action Group, the West Belfast Area Project and the Frank Cahill Resource Centre, has been growing year upon year. We wish them the very best of luck (and the very best of weather!) on their trip tonight.