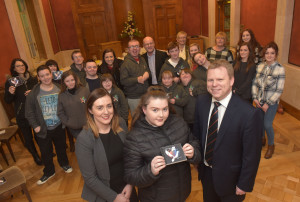 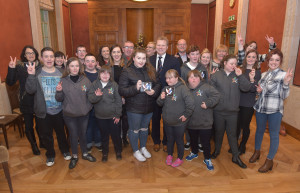 Upbeat Youth launched their brand new CD at Stormont buildings on Monday 9th January 2017. The project was funded by OFMDFM T-BUC (Together Building a United Community) programme .The partnership of AAB, Solas and Kids Together all pan disability charities brought together young people with a disability from across Belfast to embark on a unique series of music song-writing and production workshops resulting in the two songs being recorded at a top Belfast Recording studio.

The Song has gathered great momentum being aired on Cool FM and Downtown Radio. The young people’s endeavours and hard work can be seen this Friday 13th January 2017 at 8pm on the Pamela Ballantine show on UTV.

The tracks will be available for download form ITunes etc from February.