This was the second year running that USDT sponsored an event at the festival, which is the largest arts and community festival in Ireland.

Noel Rooney, chair of the board of USDT opened the evening with a brief overview of USDT’s work and our pleasure in sponsoring the event.

Questions raised throughout the evening covered issues such as the BDS movement for Palestine, progressing on same sex marriage right and abortion rights, the cost of policing Twadell protests, anti trade union legislation soon to go through Westminster, the definition of a victim, the Irish language Act delays, abuse at Kincora in East Belfast, 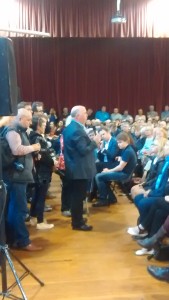 how Corbyn would implement his policies if he became Prime Minister and how abuse against women in the home could be prevented.

The event was so well attended that many people had to stand.

Feile an Phobail was established in West Belfast in 1988.